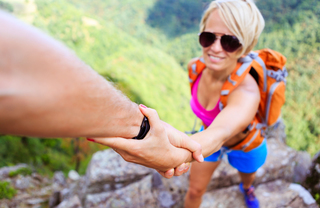 There are plenty who might argue that the best thing about living in some of the luxurious San Pedro, CA apartments is the proximity to the Port of Los Angeles or the ease with which residents can access all of the fabulous nighttime hotspots in this dense and walkable expanse of the city. Others might claim that the rich history or the many cultural and performing arts venues take the cake here.

While these are all fine aspects that contribute to the area's richness and unique vibe, there's one factor that often gets overlooked—the many amazing hiking paths that are littered all around. From beaches to parks, San Pedro has some of the most interesting trails in the city, and today we're going to fill you in on a few that you should keep on your radar.

Over a period of several years (and under the auspices of Los Angeles' Department Of Recreation & Parks), the White Point Preserve was transformed from an empty, unused patch of land into the thriving site that stands today.

When it comes to hiking, the White Point Preserve has two separate routes that provide varying degrees of challenge. The Grasslands Loop Trail, which runs about 0.8 miles, provides an easy path for less-experienced hikers. From White Point's official information pamphlet:

"This trail encircles an area restored with native bunch grasses. Human activity such as grazing of livestock and the introduction of foreign grasses have shrunk this vital habitat to just 2% of its original scope over the last several centuries."

The second path, known as the Vista Trail, also runs about 0.8 miles, but provides an additional level of difficulty for intermediate hikers to test themselves, along with some truly interesting sights:

"You will pass historic trees believed to be part of the Sepulveda homestead. You will go through restored wildflower grasslands and the slopes to the right have been planted with succulents and coastal sage scrub habitat."

When you're finished with either hike (or both, if you're feeling gutsy) you can also head to the Preserve's nature center, where you can learn more about the history, flora, and fauna that inhabit this stunning natural landscape.

Both Hikespeak and Nobody Hikes In L.A. have detailed guides about the park and some of the paths you can take—especially helpful since there are no set routes throughout the area. From the Hikespeak guide:

"One easy place to start is the large parking area outside the sports complex at the end of Friendship Park Drive."
This path, they say, will take you on an ascending journey heading up some 125 feet in elevation, past a "scenic perch" that offers up a rather spectacular view of the surrounding area. If you've got your camera with you, it'll be a nice opportunity to snap some excellent shots to add to your collection.

You'll also cross a "4-way junction," allowing you some measure of choice as to how you want to proceed. All the paths merge eventually, though, so no matter what you decide you'll still get to see the sights like the great lawn at the top of the park.

Heading a bit further west, near Rancho Palos Verdes, lies the Forrestal Nature Reserve. The 155 acre area is home to "some of the best remaining native wildlife habitat and hiking trails" in Southern California, along with some rather dramatic scenery:

"Dramatic cliffs are characterized by faults, folds, sedimentary bedding and igneous intrusions with many crystals and fossils, particularly fish scales, in the surface rock."

Before you get started on your hike, though, a note about the fossils. Under no circumstances should you touch or remove them from wherever they currently rest. Instead, you can view some of the specimens collected by professionals at the Point Vicente Interpretive Center. While you're at it, be sure to review all of the preserve rules to make sure you stay on the up-and-up during your visit.

As for the trails, you can tackle either of three that the Forrestal Reserve has laid out. The first is the Quarry Loop, an easier path that covers about 1.2 miles in total. The route promises "spectacular views from Catalina to Malibu," along with some light twists and turns and a breathtaking walk over a small bridge, which crosses over a modest stream and ends with a descent down the Pirate Trail.

The shortest trail, another one of the Forrestal Reserve's "easy" offerings, stretches a shorter 0.6 miles. It's known as Fossil Hill Loop, and, like the name suggests, it will take you through the shale cliffs, one of the main sources for the ever-popular fossils that this site has yielded. If you're feeling winded, there are plenty of benches at the top of Fossil Hill for you to take a breath and take in the sights.

The longest trail here is also the most challenging. Dubbed the Forrestal Reserve Loop, it extends a much greater 2.3 miles all told. The names of the paths you'll cross—Intrepid Drive, The Fire Road, and The Conqueror Trail—add to the excitement of tackling this more difficult route. Once you've made the ascent, you can look down in triumph upon Klondike Canyon before taking the rest of the path to the trail's exit.

When you set up shop at the modern, resort-style wonder known as The Vue, all the great hiking trails you can handle, along with the many gems hidden in the neighborhoods around San Pedro, are at your fingertips. Come experience the spacious residences, fabulous building amenities, and superior rental lifestyle for yourself—take a look at what The Vue has to offer and see why its considered part of the best of what Southern California has to offer.