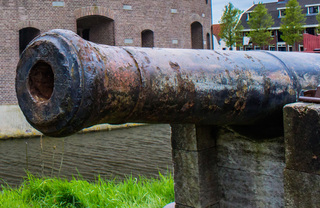 There's little doubt that The Vue in San Pedro is a stellar place to call home. Tucked away in one of the most walkable, beautiful, and serene portions of Los Angeles, there's a lot here in the way of "fun" that attracts residents to settle down — the beaches, the bars, the bistros — they all contribute to San Pedro's allure in their own unique way. Beyond these ample (but somewhat predictable) hotspots, though, there's another facet of this pristine neighborhood that continues to draw people in: its culture and history. Few places put that on display better than the Fort MacArthur Museum:

"The Fort MacArthur Museum is dedicated to the preservation and interpretation of the history of Fort MacArthur, a U.S. Army post which guarded the Los Angeles harbor from 1914 to 1974. The Museum was established in 1985, and it is housed in the corridors and galleries of historic Battery Osgood-Farley."

So, what makes this scenic site a sterling representative of the unique history of San Pedro? That's exactly what we'll be exploring today, as we delve into the wonders of Fort MacArthur Museum and why this is definitely a spot you should plan on checking out sometime in the near future.

A Glimpse Into Fort MacArthur and Its History

As the name suggests, Fort MacArthur was once a US Army installation, created in 1914 and named after Lt. General Arthur MacArthur (his son, Douglas MacArthur, would go on to command US forces in the Pacific in World War II). Though it's not operational in the way it once was at its inception, a part of the fort still serves as a residential community and administrative annex for the Air Force. Long before that, though, this part of San Pedro served several different purposes:

"This area was the center of the early shipping activity in the harbor. In 1796, Father Lasuen built an adobe shelter here, where the present post engineers building now stands. During the Mexican-American War (1845-47), Commodore Robert Stockton used the area for storage of ordnance and supplies for his march on Los Angeles."

It wasn't until 1888, however, that the area now known as Fort MacArthur would officially become the property of the US War Department. In 1897, and again in 1910, they added additional bits of land in preparation for the construction of a fort — part of a plan to guard the deep water harbor facilities of the LA Port. Construction of Fort MacArthur took place over several years, but perhaps its most impressive features, the powerful, 14-inch rifles and 12-inch mounted mortars which served as its main armaments, were completed in 1919. These guns had an effective range of 14 miles, and served as defense for the LA Harbor.

Following World War I, Fort MacArthur was a regular training and housing location for the California National Guard units, Citizens Military Training Corps, Army Reserve units, and the Civilian Conservation Corps, and over the course of its time as a full-time military installation, the fort continued to bring in impressive armaments to boost its defensive capabilities. Anti-aircraft guns were added in 1920; 1928 saw the installation of mobile railway guns; surface-to-air missiles became part of the base's infrastructure in the 50's and 60's; there was even a nuclear-armed Hercules System added to Fort MacArthur at one point over its long career.

As time marched on, however, these weapons became obsolete, no longer fitting the needs of the fort, and so, were declared surplus and largely deactivated. Fort MacArthur's time as an Army base finally came to an end in 1982, after 94 years in use, when what remained was finally transferred to the Air Force for their support housing base and administrative functions. As we'll next learn, though, the years of Fort MacArthur as a US Army installation lives on, thanks largely to the efforts of the museum and their supporters.

Encompassing a section of what once was Fort MacArthur is the Fort MacArthur Museum, founded with the express purpose of enshrining the memory of this important location:

"The Fort MacArthur Museum is dedicated to the preservation and interpretation of the history of Fort MacArthur, a U.S. Army post which guarded the Los Angeles harbor from 1914 to 1974. The Museum was established in 1985, and it is housed in the corridors and galleries of historic Battery Osgood-Farley."

Supported in large part through private donations from the community, the museum houses a large number of exhibits and displays that retell the story of Fort MacArthur and the history of the Army's presence in San Pedro. There are sections dedicated to the many defenses the Army installed throughout Fort MacArthur stood in use, there's information on how Los Angeles contributed during both WWI and WWII, there are details on the American Pacific Theater military campaigns, the development of American Air Defenses, and even how San Pedro served as a critical port for the Army and Navy throughout its operation.

The museum also participates in restorative efforts to get some of the Fort's old equipment back up and running, like the time they installed a classic GM-12 generator in the power room, bringing back a bit of its former glory. This is all to say that the museum is, by far, the authority on Fort MacArthur's history and a great place to check out if you want to learn more about San Pedro's vital role in much of the US Military's participation in world-shaping events of the 20th Century. Hopefully you'll have time to add this local landmark to your list of places to see, and have a chance to head down soon to check it all out!

All the More Reason to See "The Vue" in San Pedro

It's quite the destination, if we do say so ourselves, and just one glimpse at stunning residences like The Vue will give you all the more reason to want to call it home. Here, close to the water and the heart of what makes San Pedro such a notable neighborhood, you'll find convenience and comfort served up in equal measure, along with a stunning environment, bustling with excitement and teeming with life. Ready to experience the coastal lifestyle? Drop us a line, and learn more about what this amazing community has to offer!