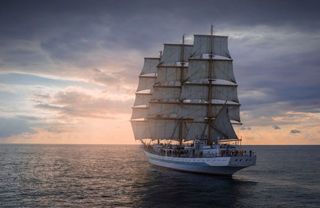 The areas around the high rise apartments in downtown San Pedro are known for the plentiful amounts of art out on the street and in public spaces, but there’s one piece that holds some special significance, especially for a port area like this — Jacob’s Ladder. This touching tribute to the merchant mariners has a rather interesting background, and it’s one every San Pedro resident should take some time to learn a bit about.

Just What Is Jacob’s Ladder?

Lost at Sea Memorials has a rather excellent description if you were at all curious about the Jacob’s Ladder reference, which goes beyond its obvious biblical connotations:

“For those who have served at sea it is also a term for a rope or cable ladder, with wooden steps, that hangs off the side of a ship. Jacob’s Ladders sway, twist and slap the sides of a ship with the wind and the waves.”

They go onto explain the symbolism of the ladder, that while they can be perilous themselves, many sailors may find them the only method for escaping perils at sea, and this brings us to the Merchant Marine Veteran’s Memorial, which prominently depicts a sailor attempting to save a shipmate while clinging to a Lacob’s Ladder for dear life.

As Lost at Sea Memorials so expertly points out, it’s a “universal moment” that any sailor, and even non sailor can understand. There are so many emotions wrapped up in this simple but powerful depiction that this work by Jasper D’Ambrosi was accepted as the design for the memorial.

Interesting fact about that, though. While the design was accepted in 1986, D’Ambrosi died that same year before he could even finish doing the final clay model for the piece. That task, and the completion of the statue, was handed off to his sons Marc and Michael. So, in a sense, the statue isn’t just a tribute to all of the nation’s brave merchant marines, but also from sons to their father, adding another layer of significance to this spectacular sculpture.

And while the sculpture is indeed a central part of the memorial, bear in mind it isn’t the only part. Back in May of 2003, a second component to the Merchant Marine Veteran’s Memorial was added: the five walls of honor that pay tribute to some important names throughout the history of the merchant marines, men and women who decided to serve and lost their life in the course of that service.

Sure, the luxurious apartment spaces are a big part of what makes communities like The Vue so appealing, but it’s not all about the gorgeous interiors. People love calling San Pedro home because it’s a great location to live — one with hidden depths, and its fair share of interesting history. Come experience it all for yourself. See what The Vue has to offer, and learn how you can make one of these lovely harbor high rises your very own.