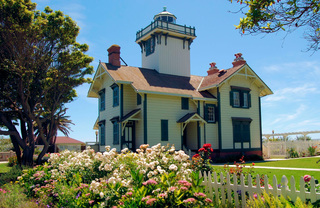 While we wouldn’t be audacious enough to claim you can quite see Point Fermin Lighthouse (and the surrounding park) from all the San Pedro apartments for rent, if you’re living in the area, you’ve probably heard of it, at the least, and know it holds a great historical significance:

“Built in 1874, the Point Fermin Lighthouse was the first navigational light into the San Pedro Bay. Phineas Banning, with the support of many local businessmen, petitioned the Federal Government and the US lighthouse Board to place a lighthouse on the point in 1854…”

But, even with that being the case, how much do you really know about Point Fermin and its importance in the greater story of Los Angeles history? If the answer is “not much,” we suggest you keep reading, because today, we’re diving into the rich and riveting story of this prominent city landmark for you.

The Story of Point Fermin Lighthouse

The first thing to note is that the construction of Point Fermin Lighthouse was part of a trio. It actually had two sister stations — East Brother Island Lighthouse, in Richmond, California, and Mare Island Lighthouse in Carquinez Strait (which was torn down in the 1930s).

Point Fermin was built in 1874, making it one of the oldest lighthouses on the West Coast, with genuine California redwood, and included a (for the time) state-of-the-art Fresnel Lens to help project its light. The Victorian architecture is a wonder example of the tastes during the time, and was designed by one Paul J. Pelz, draftsman for the US Lighthouse Board. The design, in case you were wondering is a Stick Style construction, one of the earlier Victorian styles that emphasized simplicity over ornate decoration, and features, among its many characteristics, gabled roofs, horizontal siding, decorative cross beams and hand carved porch railings.

During its time in service, Point Fermin saw several keepers call the structure home. First were Mary Smith and her sister, Ella Smith. They soon decided to depart from the “lonely occupation,” however, since, at the time, “there were no other settlers nearer than Wilmington.” The 1880s saw Captain George Shaw become the next keeper for the lighthouse, but rather than dismiss the job as a lonely one, he turned the lighthouse into a veritable party hotspot:

“Visiting the lighthouse during the years that Captain Shaw was in residence became a popular activity for the local residents as well as many from the greater Los Angeles areas. The US Lighthouse Board both required and encouraged keepers to allow the public access to the lighthouse and Captain Shaw gave many tours of the establishment and its workings.”

During Shaw’s time at the lighthouse, visitors came from near and far to picnic and engage in social activities, and as San Pedro grew in size, so too did the fame of the Lighthouse. After George Shaw’s time, the last keepers of the lighthouse, the Austin family, moved in around 1917. During this time, the lighthouse also saw several improvements, such as a 6,600 candlepower electric light to help it beam light even further out to sea, and remained in use until 1941, when the bombing of Pearl Harbor forced them to terminate the light to protect against potential enemy attacks. The light was never switched back on, but the structure, which fell into disrepair after, was restored several times in the years following.

Nowadays, the lighthouse from Tuesday to Sunday, 1:00PM to 4:00PM. It’s closed only on Mondays, major holidays, and special events taking place within the park. There are guided tours on the hour, but for large groups, it’s best to call ahead so that they can make special arrangements to accommodate you. If you were wondering about the address, you can find the lighthouse at 807 West Paseo Del Mar, San Pedro, CA 90731. It’s not that much of a hike if you live in San Pedro, so be sure to schedule some time soon to get out there.

What About the Park?

Don’t forget that surrounding the lighthouse is a lovely park, appropriately named Point Fermin Park. This 37-acre expanse features its share of “tree-shaded lawns, sheltered pergolas, colorful gardens and a promenade along the edge of the palisade.”

There are plentiful picnic areas, a playground for the kids, and even a small amphitheater where they hold the occasional performance, which include “Shakespeare By the Sea, Music By the Sea, Light At the Lighthouse, and Car Show by the Sea.” All around the area, you’ll get to enjoy spectacular views of the coastline (and might even spy a dolphin in the waters), and the park itself is prominently featured as part of the Best of the South Bay:

“With lush lawns, ten pergolas along the cliffside, eight picnic areas, a playground, and a walking path; this park is an ideal place for a picnic or a stroll along the promenade.”

All-in-all, this is a wonderful part of San Pedro to explore solo, with a friend, or with your children in tow, so don’t miss out!

The San Pedro Apartments for Rent Are Right in the Neighborhood

Who knew that fabulous places to live, like The Vue, were so close to this kind of California history? Truth be told, these kinds of windows into the past are all around, and luxurious San Pedro residences put you right in the neighborhood so you can visit as often as you’d like. Beyond the amazing historical connections, though, living here gives you an opportunity to explore the best of the LA Harbor in an upscale setting that’s tough to beat. So, what are you waiting for? See what The Vue and San Pedro have in store for you, then make this corner of the city your very own.