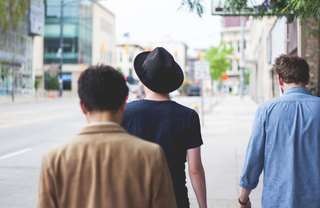 If you call The Vue in San Pedro home, then you’ve likely heard at least a little something about the historic Little Italy revival celebration that took place in early October. Along with City Councilmember Joe Buscaino, scores of residents flocked to downtown San Pedro for the unveiling of the new Little Italy sign and the official “grand opening” of this part of the city as such. As with anything that happens in this town, though, there are two sides to the story. As important and historic as the designation of Little Italy was, it’s also important to hear some of the questions that other city residents have raised about move. That’s what we’ll be looking into today, as we check out the mixed reception that the creating of San Pedro’s own Little Italy has received.

Coompounding Foss’ confusion were the boundaries that the city used to define the area of this new Little Italy. Foss said that the borders encompass a “largely residential area with no particular connection to the historic Italian community,” a sentiment that you’ll find echoed in other pieces critical of Little Italy’s founding, like that by Donna Littlejohn in the Daily Breeze.

Littlejohn points out that boundaries of Little Italy appear “random,” and adds that there’s no “obvious physical landmark” there that one would associate with a strong historic Italian community. Littlejohn goes on to mention that the plans to create a Little Italy in San Pedro were not met with universal praise from the community. In fact, for some, they were a surprise, and have come under criticism for “not being more inclusive of the other ethnic groups that settled there and helped establish San Pedro, including the native Tongva people, Croatians, Hispanics, Latinos, Swedes, Portuguese, Japanese and Irish.”

And this isn’t to say that the idea behind creating Little Italy or the push for preserving historic LA communities is wrong. However, these criticisms are food for thought as you ponder the reception to the idea and watch how it all plays out.

The Vue In San Pedro Puts You Close

For a front row seat to all the worthwhile happenings in San Pedro, you’ll find it hard to do better than The Vue. These fabulous high rise apartments, located right on West 5th Street, put you right where you need to be in downtown San Pedro, overlooking the wonderful LA Harbor, and right in the mix of all the most cherished neighborhood institutions. When you’re ready to get out there and explore, you’ve only got to start walking, as almost everything you might desire is well within reach. And with proximity to ample recreation and relaxation, you’ll find it easy to stay active and rested in equal measure. Come see what it’s all about. Learn what The Vue has to offer you, and how you can make one of these stellar residences your very own today.