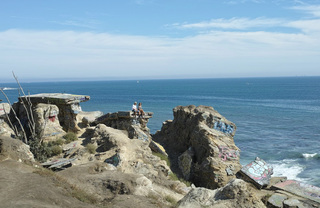 If you’ve lived in San Pedro for even just a short while, chances are you’ve at least heard mention of The Sunken City. Just a short distance from The Vue apartments, this urban ruin has its fair share of admirers (it’s a popular destination for urban explorers), but also has a bit of chilling history (more than one adventurer has been found dead in the area in recent years). There’s even been talk of officially opening this area up to the public, and, while that may still be a ways off, today, we’re going to take a look at the backstory of Sunken City (and what makes it such a hotspot for explorers) to help get you better acquainted with the area.

The Basics on Sunken City

If you’re looking for a quick rundown on what, precisely, The Sunken City is, it gets no more succinct than this description from Atlas Obscura:

“In 1929, a landslide in San Pedro, California, caused a neighborhood of exclusive homes to tumble into the ocean. At its peak, the land movement was measured at an astounding 11 inches a day. During the slide, part of the adjoining Point Fermin Park also fell into the ocean.”

And so The Sunken City has remained for close to a century. Abandoned, and, officially, closed off to the public. The reasoning behind this shouldn’t be too difficult to ascertain, as the area is still dangerous, on account of both its terrain and continuing geological activity.

The cliffs at The Sunken City are steep, and the rocks and ground are loose, meaning there’s a great potential for slipping and falling (this is suspected to be the way that more than one hiker has met their unfortunate end). Compounding that danger is the fact that the land around The Sunken City is still shifting, and while it’s not as geologically volatile as it once was, the changing earth creates new cracks and hazards to anyone who dares to venture to this ground.

It’s for these reasons, and the many deaths that have occurred in the area, that officials have put up warnings for people not to trespass in The Sunken City. More than a few have met their demise here, and yet, it persists as a highly desirable location for adventurers. We’ll be examining why in the next section.

The Appeal of the Sunken City

For years, The Sunken City was no more than a local curiosity. Something that people in and around San Pedro knew about, but the greater public had no reason to be interested. With the advent of social media (and its being featured in popular movies and television programs), it seems, the appeal of The Sunken City started to climb. Now, you can even find whole blog posts dedicated to boasting of this area’s appeal, documenting its graffiti art, and detailing how to venture to it as safely as possible.

And what is that appeal, precisely? Part of it lies in the fact that the area is off-limits. As most parents will be able to tell you, when you make something forbidden, that only serves to heighten its mystique. Beyond just being a place you’re not supposed to go, however, the views and scenery here are, admittedly, spectacular.

Beautiful views of both Catalina Island and the San Pedro Port make this a sight to behold. In addition to stunning views of impressive (but far off) scenery, there’s also much at this hidden tourist attraction itself that draws in would-be explorers. The remains of the buildings that once stood here make for a photographer’s dream, as does the graffiti art that covers the rock and concrete — in the photo logs of others who have ventured to the site, you’ll see this artwork featured prominently, along with scattered shots of the Pacific Ocean and those lovely cliffs.

In spite of all this beauty, though, we’d like to reiterate that traveling to The Sunken City is still trespassing (and hazardous, to boot), though, in recent years, there have been a few pushes to try to change that…

Opening The Sunken City to the Public?

Back in early 2018, Curbed covered the reports of a December 2017 rockslide that occurred at The Sunken City, which had reopened the conversation about making the area open to the public. The fence that ostensibly keeps visitors out doesn’t exactly work as intended, argued supporters of opening the area, so why not just take it down?

This isn’t the first time people throughout the decades have pushed for it, as you can find past proposals suggesting the idea dating back to 1989 (and even earlier). The issue, however, lies in making The Sunken City a safer place to venture, and finding the money necessary to do so:

“The geological study found that the areas closest to the jagged bluffs and the ocean were very unstable and unsafe for the public to access now, and it didn’t identify a way to make these areas safe for future access… In order to do the ‘intense research’ necessary to move forward—and design and implement the recommendations of the report—the recreation and parks department needs money, says general manager Michael Shull.”

Until there’s significant will to move forward on opening up The Sunken City for official public access (and that funding can be secured), the dream of making this a “legit” destination for residents and tourists remains up in the air.

There’s Even More to Explore Around The Vue Apartments

Being in San Pedro means there are even more wonders to behold. While they might not all be photogenic modern-day ruins, the on-limits portions of San Pedro still pack plenty of excitement, and conveniently located communities like The Vue Apartments put you right in the neighborhood to visit them all. Ready to experience the thrill of LA Harbor life? Check out everything The Vue has to offer, and drop us a line when it’s time to make one of these stunning, high-rise residences your own!