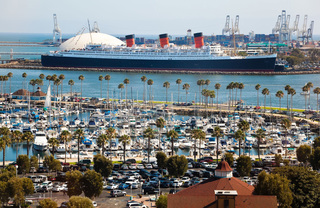 Los Angeles is filled with hidden wonders to discover and explore. Terminal island, a man-made piece of history, remains an unknown view into the past to many LA residents. From you home at the downtown apartments in San Pedro, you can take a day trip to this unique piece of California history.

Today, Terminal Island is large piece of land filled with container terminals that remains in the administration of Long Beach and Los Angeles. Outside of the container terminals, you can find a unique mix of abandoned industrial areas and historic sites.

Largely artificial, the landscape gives way to perfectly manicured curves and shapes that make it seem almost out of place amongst the coastal scenery of Southern California. Wharf rats, fishermen, and truckers take the place of the surfing and beachgoing scene. Palm trees are replaced by giant cranes, and piers are found in lieu of sandy beaches.

The island is caught in-between a new land use plan that aims to demolish old structures for new planning and a motion to preserve its historic significance from the National Trust for Historic Preservation, which placed the island on America’s 11 Most Endangered Historic Places. Labor issues and talks of pollution also plague the island, but there’s more to the island that its disputes.

The Founding of an Island

Los Angeles’ history dates back nearly 13,000 years to aboriginal descendants of the Chumash and the Tongva, both Native American tribes. While it later became a Spanish empire and eventually a part of the United States, Terminal Island was nothing more than barrier of sediment deposited by nearby rivers called Rattlesnake Island.

In 1858, a man by the name of Phineas Banning created Wilmington, a town that connected railroad lines to Salt Lake City and Yuma. Thirteen years later, Banning commissioned a three-meter deep channel to Wilmington that allowed it to become a port town. Generations later, his sons continued to expand upon his vision to create something similar in geography to modern-day Terminal Island.

With the success of Wilmington, the Terminal Land Company eventually bought Rattlesnake Island to commission a railway connecting its eastern side to Los Angeles. The company renamed their large sediment barrier to Terminal Island, giving this piece of manufactured land its official name.

At the same time, Collis P. Huntington of the Southern Pacific Railroad was promoting Santa Monica Bay’s harbor potential. This caused a snowball effect that allowed Los Angeles to incorporate towns like Wilmington and San Pedro into its fold, which included Terminal Island, to create the massive port you’re familiar with today.

The discovery of oil at Signal Hill in 1921 significantly changed the landscape of the island. Fetching a high price in foreign markets, California needed a larger port to transport their liquid gold. The port expanded to a massive size, allowing for both commercial and residential property.

The island became an eclectic mix of port terminals and upper-class paradise. A high-end resort and yacht club formed toward the end of the 19th century, creating a playground of neighborhood amenities for anyone wealthy enough to afford it. Then, a change in dietary trends led to the creation of numerous canneries throughout the island.

Prior to 1905, tuna was considered “trash fish” by the American population. An increase in diesel powered boat engines and the near extinction of other fish species in the area, however, caused the fishing industry to focus its sights on the now popular seafood.

Companies worked to remove tuna’s pungent smell and marketed their artificial blandness as a selling point for culinary delights, which caused demand to boom. Suddenly, canneries were in high demand. Star-Kist and others flooded the island, causing the upper-class to leave and the working class to take over. While Filipino, Japanese, and Mexican workers found there home on Terminal Island, it was the Japanese who would leave a permanent mark during the tragic internment of WWII.

The 3,500 Japanese-Americans who called Furusato home were shipped away to concentration camps in 1942, along with an estimated 110,000 others across the country under president Roosevelt’s Executive Order 9066. The island was quickly turned into Roosevelt Base in light of the war, though now-empty buildings of Furusato remained.

Remnants of the cannery days remain in the form of run-down warehouses, empty stores with a ghostly feel, and the shipping docks that continue to act as ports today. Historic remnants are scattered across Terminal Island for anyone who wants to take a different type of sightseeing trip.

Sewage Pump Station #669, which continues to function to this day, remains the second-oldest pumping station in L.A. The Badger Avenue Bridge, rebuilt in 1996, retains its original designs from 1924. Allen Field and the Naval Reserve retain old buildings despite becoming the Pier T Container Terminal, the Navy Mole is home to unique ships in the American Navy, and Fireboat House 1 still stand from its construction date in 1927.

A day on the island is a unique glimpse into the past and how the history of Terminal Island shaped this man-made patch of land as well as the Los Angeles harbor into what residents see today. Due to the limited number of visitors this area receives, you might want to stop at the Los Angeles Maritime Museum to see the exhibits that cover the history of this interesting island to instead.

Across the bay rests The Vue high-rise apartments, home to a captivating living environment that soars above downtown San Pedro. Complete with gourmet kitchens, expansive floor-to-ceiling windows, and stainless-steel appliances, you’re right in your comfort zone.

Modern touches ranging from imported tile flooring to upgraded cabinets and appliances create an envious appeal, while a series of carefully curated amenities cater to daily life. Stay active in the yoga and Pilates studio or the state-of-the-art fitness center, relax in the sky lounge and resort-style pool, or handle today’s projects in the business and conference room. Mingle with residents and entertain guests in the clubhouse with media lounge. Take advantage of 24-hour concierge services. Everything you need is right outside your door.

Welcome to The Vue, a redefined sense of elevated living in San Pedro. Unwind, explore, and enjoy the Bay Area like never before.