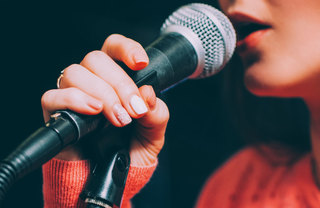 Have you heard the inspiring tale of the “Subway Soprano?” Her name is Emily Zamourka, and she’s made quite the buzz as of late around the waterfront apartments in San Pedro:

“Earlier this week, she was seen singing on the subway — opera no less — and as more people explored her story they were upset to discover a sad side to it, most notably that the woman with the lilting, lovely soprano voice was homeless.”

As you may have guessed already, her impressive vocal talents have taken the social media world, and Los Angeles in general, by storm. This is a story so enchanted you might at first think it the product of some rejected screenplay. Make no mistake, though, this is the real deal, and truth is often stranger than fiction.

The Story of Emily Zamourka

Not long ago, according to KUSC, Emily Zamourka was just another one of the “60,000 homeless people in Los Angeles County.” Zamourka was a musician, you see, who learned to play piano, violin, and trained her voice while she lived in Russia. She came to the United States at the age of 24, using her talents as a performer to get by, but following an injury (and the loss of her precious violin), she lost her only way of making money. Subsequently, she could not pay for lodging, and was cast to the streets with no way to get by.

That is, until a video was uploaded of her singing opera in the Koreatown Metro Station. It didn’t take long for folks to dub her with a nickname, the “Subway Soprano” (on account of her vocal range), and the community banded together to help raise the funds to find her a place to live. The outpouring of kindness didn’t just stop there, though. She’s received offers for recording contracts, and even an invitation from the office of city councilman Joe Buscaino to perform at the grand opening of the new Little Italy of Los Angeles.

It’s a remarkable turnaround, but the positive aspects of this story should also draw attention to the dark sides of homelessness. In her words, Zamourka said she felt “despised,” particularly when she was homeless. Zamourka hopes that hearing her tale will allow others to “be kind to everyone they see, especially the vulnerable, like the homeless.” Truer words aren’t often spoken, and Emily’s reminder is one we should all strive to live by as we go about our day to day.

Forge Your Own Epic at the Waterfront Apartments in San Pedro

While you might not go from relative unknown to city sensation overnight, amazing LA residences like The Vue will make for the perfect place for you to start crafting your own legacy within this magnificent city. With an enviable seaside location, spacious interiors, and a whole host of fine amenities at your fingertips, it’s like the backdrop to a well-penned tale where the hero triumphs over all the hurdles set in their path. Make your own history here. Learn more about what The Vue can offer you, then drop us a line to make one of these splendid residences your new home today.